Archaeologists claimed yesterday to have uncovered one of the world's first churches, built on a site believed to have once housed the Ark of the Covenant.

The site, emerging from the soil in a few acres in the hills of the Israeli occupied West Bank, is richly decorated with brightly coloured mosaics and inscriptions referring to Jesus Christ.

Archaeologists look over a mosaic discovered at Shiloh

According to the team, led by Yitzhak Magen and Yevgeny Aharonovitch, the church dates to the late 4th century, making it one of Christianity's first formal places of worship.

"I can't say for sure at the moment that it's the very first church," said Mr Aharonovitch, 38, as he oversaw a team carrying out the final excavations before winter yesterday. "But it's certainly one of the first." He said the site contained an extremely unusual inscription which referred to itself, Shiloh, by name.

"That is very rare and shows early Christians treated this as an ancient, holy place," said Mr Aharonovitch. According to the Old Testament, the Ark of the Covenant, which contained the two tablets inscribed with the Ten Commandments, was kept by the Israelites at Shiloh for several hundred years.

It was eventually moved to the Holy of Holies in the Jerusalem temple that the Bible says was built by King Solomon around 1000 BC. When the temple was sacked by the Babylonians 400 years later, the Ark was lost, sparking theories about whether it had been hidden or destroyed.

The team at Shiloh is considering whether to dig under the beautiful mosaics that they have uncovered, in order to find traces of the Ark. "We have to decide whether to fix the mosaics here or take them to a museum," said Mr Aharonovitch.

Jewish residents in the modern settlement of Shiloh, which sits on a hill amidst Palestinian villages, want the team to keep digging.

David Rubin, a former mayor of Shiloh, said: "We believe that if they continue to dig they'll reach back to the time of the Tabernacle," referring to the portable place of worship where the Israelites housed the Ark. 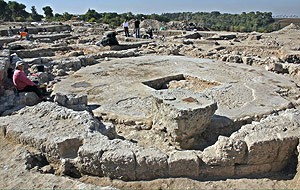 Photo: The round structure built of well-dressed ashlar stones uncovered in the IAA's excavation at Mishmar David

Evidence of an ancient settlement was uncovered in the IAA excavations that were conducted at Mishmar David at the request of the Israel Lands Administration. The construction and development at the site will be carried out taking into consideration the unique ancient remains and incorporating them into the new settlement.

In the salvage excavations the Israel Antiquities Authority is carrying out at Mishmar David, at the request of the Israel Lands Administration, the remains of a large settlement that dates from the Early Islamic period to the Crusader period were exposed. Residential buildings, villas, public buildings, streets and alleys, and an industrial region in which there are agricultural installations etc were discovered at the site. The highlight of the excavations is a round structure built of well-dressed ashlar stones, c. 10 m in diameter and preserved to a height of 3 m. The floor of the structure is paved with a polychrome mosaic decorated with geometric patterns and a palm tree motif. Archaeologists from the Israel Antiquities Authority said this is a unique building, the kind of which has not been encountered to date in any other archaeological excavations in the country. The building indeed dates to the Byzantine-Islamic period but the nature of it and its purpose are unclear, it was reported.

Dr. Eli Yannai, director of the excavation on behalf of the Israel Antiquities Authority, noted that buildings such as the one that was uncovered were usually meant to commemorate an important historic event that was of significance to the population that resided there. It can be a building that was erected in memory of a person who was martyred because of his religious beliefs, a miracle that occurred at the site or a visit by a saint, Yannai said.

The importance of the excavation finds and their contribution to the study of the past lie in the intensity of the remains, the size of the Umayyad settlement which extends across c. 6 dunams and the evidence that the population that lived there was a Christian population prior to it having converted to Islam. The findings that support this assumption are unequivocal Christian symbols such as crosses that were revealed on clay lamps and inscriptions in ancient Greek that mention the mother of God  a Christian saying that was characteristic of the Byzantine period. In addition to this is the presence of an industrial zone for the large scale production of wine intended for consumption by the local residents and for commercial requirements. On the other hand the bronze coins that were recovered at the site bear the names of caliphs from the Early Islamic period and some of them were struck with the following Arabic inscription: There is no God but Allah and Muhammad is his servant.

The excavation at Kibbutz Mishmar David is continuing in four areas:

Area B (Hagit Torgë  area supervisor): building remains that date to the Umayyad, Abbasid and Mamluk periods were exposed, including the walls of a very large structure.

Area C (Fanny Vito  area supervisor): in the northern part of the area remains of a round building were discovered including a mosaic pavement that dates to the Early Islamic period. The excavation around this building continues. The function of the building has not yet been established but given the thickness of its walls and its diameter (c. 10 m) this is a monumental structure that was probably a public building.

In the middle area (Uzi Ad  area supervisor) remains of installations were discovered whose function is still unclear.

In the southern part of the area (Gerald Finkielsztejn and Yossi Elisha  area supervisors) residential buildings and remains of another massive building, whose function remains unclear, were discovered.

In Area F (Edwin van den Brink  area supervisor): tombs and the remains of a settlement from the Middle Bronze Age were exposed.