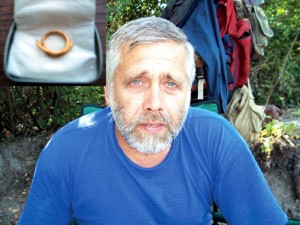 The bijou is by two millennia older than all ever discovered 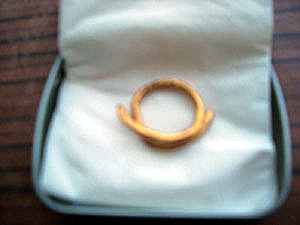 The oldest golden earring in the world was found during excavations in the village of Hotnitza, Veliko Tarnovo region. Archaeologist Assoc. Prof. Stefan Chohadzhiev who has been excavating the mound near the village since 2000, is the lucky discoverer of the find, which dates back to 7000 BC. The bijou is by 2,000 years older than the oldest known gold treasure which has been found at the same place by archaeologist Kolyo Angelov.

The earring weighs about 4 grams - its heavy and massive. Its not clear who the find belonged to. The earring was found near a wooden floor which dates back to the 7000 BC, too. Most probably there stood a wooden chalet which was destroyed and the place was turned into a huge dumping site. The interesting point is that only one of the earrings has been discovered - the other is missing. Archaeology students from St. Cyril and St. Methodius University of Veliko Tarnovo help the team of experts in their work. Scientific expeditions, supported by the Veliko Tarnovo University, are held in the village of Hotnitza every year.

SOFIA, Bulgaria A 2,200-year-old set of gold jewelry was unearthed from a Thracian burial mound on Bulgarias Black Sea coast, the archaeologist who led the excavations said Monday.

Daniela Agre said her team in late August found dozens of tiny jewelry pieces in the tomb of a woman, most likely a Thracian priestess, near the resort of Sinemorets, about 500 kilometers (310 miles) southeast of the capital, Sofia.

The discovery included two earrings, crafted like miniature chariots, as well as parts of gold necklaces, one decorated with a sculpture of a bulls head.

A tiny plaque that appears to be the necklaces fastener bears a Greek inscription, saying "made by Demetrius," Agre said, suggesting this could have been the name the nobleman who ordered the jewelry.

The artifacts were unearthed Aug. 25-27 during urgent recovery works at the Sinemorets mound, which was half destroyed, allegedly by a local hotel owner who thought the pile of earth was an ugly sight for tourists.

Most of the more than 160 finds, including gold and silver accessories and pottery, were badly damaged because the womans body had been cremated, an unusual practice for this region, Agre said.

The Thracians were an ancient people that inhabited the lands of present day Bulgaria and parts of modern Greece, Turkey, Macedonia and Romania between 4,000 B.C. and the 6th century A.D., when they were assimilated by the invading Slavs.

About 10,000 Thracian mounds  some of them covering monumental stone tombs  are scattered across Bulgaria.

Bulgarias National History Museum has prepared a special treat for its visitors - a display of a priceless Thracian treasure unearthed recently.

The 160 gold and silver objects that have probably accompanied a priestess on her trip to the underworld were exhibited for the first time in Sofia on Monday.

Archaeologists date the exquisite treasure back to the 3rd Century B.C. and are astonished by a tiny golden plate engraved with the cryptic words "Demetrius made..."

Such a plate has never before been unearthed in Bulgaria and experts have only seen a piece that resembles it on the grave of Alexander The Great, hence their excitement of the fresh findings.

The priestess has most likely been ritually burned to death, Daniela Agre, head of the excavation team revealed. Archaeologists believe that the ceremony may have been in honour of Dionysus. 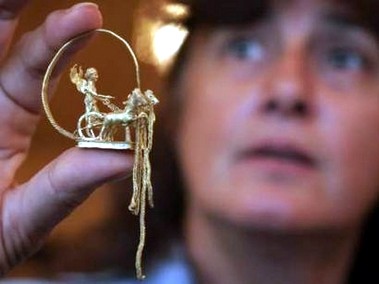 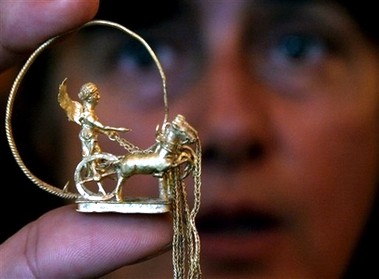 Bulgarian archaeologist Daniela Agee shows a small ancient golden chariot, during a news conference in Sofia, Monday, Sept. 4, 2006. A 2,200-year old set of golden jewels has been unearthed in a Thracian burial mound at Bulgarias Black Sea coast. The finds include two miniature golden chariots that most likely were part of a diadem, as well as a well-preserved golden necklace, decorated with a tiny sculpture of a bulls head. They were unearthed late in August during urgent recovery works at an ancient burial site near the Black Sea resort of Sinemorets, located some 500 kilometers (310 miles) southeast of the capital, Sofia. (AP Photo/Petar Petrov) 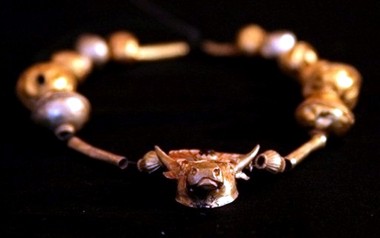