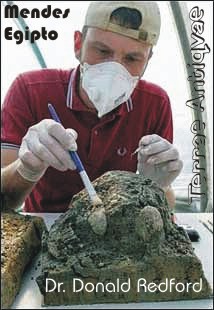 Archaeologists have begun to piece together the story of a mysterious massacre more than 4,000 years ago in the former royal city of Mendes, which flourished for 20 centuries on a low mound overlooking the green fields and papyrus marshes of the Nile delta north of Cairo.

Donald Redford of Pennsylvania State University had begun to excavate the foundations of a huge temple linked to Rameses II, the pharaoh traditionally linked to the biblical story of Moses, when he found an earlier structure destroyed by fire, and evidence of a grisly episode of death on the Nile, he told a Bloomsbury Academy conference in London on Saturday.

"We were under the misapprehension that it was a new temple on a new site," he said. "But in fact I sunk a trench below the existing temple and was really surprised beyond belief by what I found. There was a late Old Kingdom structure of some sort, a great mud brick platform 40 metres wide, on which a temple had once stood."

Under the fire-scorched rubble, the scientists discovered the first of at least 36 bodies, victims of some brutal event 40 centuries ago. "We thought they had died where they were. But it has now become apparent that they were killed elsewhere and thrown in front of the podium. The mud brick of the burning temple cascaded over them. They were covered up and never retrieved. So there is a certain amount of foul play here."

They found old and young, men and women, tumbled in disordered heaps. In a civilisation that made a cult of death, such discoveries are rare: even the poorest were interred formally, and with some provision for the afterlife.

The arid, baking climate of Egypt helps in preservation. But the discovery of human remains in one of the cities of the delta - annually flooded by the Nile, and in some parts inundated for 10 months of the year - astonished the researchers.

"The bones were in very bad condition. It was a wonder that the bioanthropologist discovered them at all. It would have been so easy to trowel through, and not recognise them. They are virtual powder in the mud. But once you do detect them, and are very careful, out comes the outline of a body," he said.

There is no obvious indicator of how the victims died. They may have been knifed, or poisoned, or smothered. There are no bludgeon marks on the surviving skeletons. The bodies were casually thrown in, one on top of another. The temple had been rebuilt somewhere between 2150 and 1950BC. The implication is that the mysterious murders must date from the collapse of the Old Kingdom, or the turbulence between 2250BC and 2150BC.

The fortunes of Mendes rose and fell for 25 centuries. The city was a centre of two cults, of the ram god and a fish goddess. It thrived as a trade centre, and early names suggest that semitic herdsmen must have frequently crossed the Sinai desert to visit the region. Scientists have slowly unearthed evidence of factory-scale brewing and baking, of a busy harbour, of a flourishing perfume industry in the Graeco-Roman years and of hasty burials, perhaps during an epidemic of plague.

Mendes reached its heyday during the ancient Greek era. It became a centre of resistance to Persian conquerors who held Egypt for 120 years - a freedom fighter called Neferites I founded a dynasty there - and Ataxerxes the Persian sacked the city in a punitive expedition in 343BC. The settlement survived into the early Christian era, but the Mendesian branch of the Nile meandered away altogether, leaving an enigmatic pattern of granite obelisks, limestone ruins and poor mud graves on a mound of dense sand above the water table in what is now a vast agricultural plain.

In about AD1,000, an Arab traveller reported that he had seen the temple enlarged by Rameses II still standing. The first European travellers during the Renaissance found it much as it is today. "It must have been during the middle ages that it was finally swept away," Professor Redford said.

Currently Donald Redford was granted access to dig at four sites at the Akhenaten Temple in East Karnak, which is part of the ancient city of Thebes, Tel Kedwa in North Sinai, and Luxor, located in the Valley of the Nobles. The ancient city of Mendes boasts one of the largest and longest inhabitance. Mendes was a thriving city, which had two harbors and an elaborate trade network with countries. At Akhenaten Temple, Redford and his team excavated the half-mile long by 212 meters temple, which housed giant statues of King Akhenaten. At the North Sinai site, Redford says the civilization lasted only a short while, perhaps a hundred years. In Luxor, Donald and his wife are unearthing Akhenatens butler. Redford has 40 years of experience in Egyptology.

When I start teaching a course on ancient Egypt, I always tell my students, by the end of the semester, someone will have discovered something that will change our minds- Donald B. Redford, 325 Weaver Bldg., University Park PA 16802; 814-863-8945; dbr3@psu.edu.

1964-1965, 1967-In Jerusalem Redford was site supervisor for excavations under the British School of Archaeology

1968-Located in Lower Egypt, Redford was Epigrapher at the excavations of Buto under Egypt Exploration Society

1970-1972-At the temple of Osiris, Karnal University of Toronto and SUNY Binghamton

1981- Director of the Jordan Toponym Survey

1991-present-Director of excavations at Mendes in Lower Egypt

1992-present-Epigrapher at the Theban Tomb Survey

Seven Studies, A Study of the Biblical Joseph Story,

The Akhenaten Temple Project I,