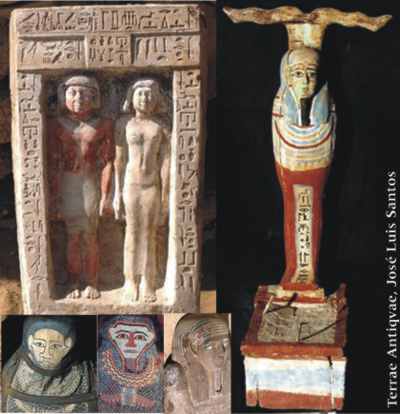 Secrets from the sand

Top: anthropoid sarcophagus emerging from the sand; the statuette of god Ptah-Sokar; the naos; a bearded net cover showing the mummy's facial features

Coincidence often plays a major role in discoveries in Egypt. This is evident from the unearthing of Tutankhamun's tomb in Luxor, the royal treasures of Tanis in Delta and Khufu's solar boats in Giza, to mention but a few examples.

This time, archaeologists digging in Saqqara -- which is perhaps more commonly known by its Ancient Egyptian name Memphis -- came quite unexpectedly upon four remarkable troves: three anthropoid sarcophagi and two painted statuettes of the renowned Saqqara's god Ptah-Sokar dating back to the late Pharaonic period, as well as a Naos and a false door from the Fifth Dynasty.

The story of this discovery began early this month when a team of Australian archaeologists of Macquarie University was clearing the debris located at the northern side of Teti's pyramid in Saqqara in an attempt to discover the northern and western limits of the necropolis.

Digging three metres below ground level, excavators stumbled upon several grave objects dating back to different eras. Some suggested that they did not fit into the historical context of the area, but that they had very possibly been transported from elsewhere. Two Byzantine lamps -- probably from the third or the fourth century AD -- along with some Coptic artefacts were found, followed by a number of very poor, badly preserved and charcoaled late Pharaonic period burial sites on a deeper level.

Seven coloured amulets featuring different Ancient Egyptian deities such as Anubis in human form with a jackal head, Isis suckling her son Horus, and the Wedjat eye were unearthed in one burial site, while inside a neighbouring grave, the brushed bones of a child were found. Two small baskets containing symbolic hair locks made of thread and a necklace bearing several tiny amulets depicting Bes, god of joy; three amulets depicting Taweret, god of fertility; a Wedjat eye pendant and a cobra pendant were also unearthed, along with a collection of pottery vessels and headrests of different shapes and sizes.

Everything was going smoothly until early last week. It was a warm winter's day, when the beautiful sculpture of a bearded man's face emerged from amidst the layers of sand, announcing that a master discovery had been made. Archaeologists and site-workers anxiously probed into the sand and uncover three magnificently carved unidentified wooden anthropoid sarcophagi dating back to the 26th Dynasty.

Removing the lid of the first Osiris-shaped sarcophagus showing a man with a curved beard, a very well preserved mummy overlaid with a brightly coloured beaded net determining the facial features of the deceased wearing an elaborate collar, his body and knees were found. On the chest area, the winged god Kheper is represented followed by goddess Nut in the shape of a kneeling winged woman. Below, the four sons of Horus -- Imstey, Hapy, Duamutef and Kebehsnuef -- are depicted. Their representation was believed to protect the deceased during their journey to the afterlife and eternity.

Inside the second female-shaped coffin, another mummy was found. This is also covered with a blue beaded net outlining the woman's face, her body and an elaborate collar, followed by the winged gods Kheper, Isis and Nephthys and the four sons of Horus.

The third sarcophagus, which is very similar to the first one, contains a well preserved mummy covered in painted linen showing the facial and body details of the deceased. The painting also bears the same deities represented in the beaded net of the first coffin, along with some funerary text. Two painted wooden statuettes of the Saqqara god Ptah-Sokar were unearthed beside the sarcophagi on a rectangular base; in one he is shown wearing a horned crown and two well preserved feathers, while the two feathers of the second statuette are missing.

Two wooden boxes -- one of which bears the depictions of a Ba bird perching on its lid -- were found among the grave collection. Early studies reveal that they contain material that was once used in mummification.

"It is a very important discovery revealing that Ptah-Sokar prevailed as the main god of Memphis [Saqqara] starting from the Old Kingdom right through to the Late Period," Supreme Council of Antiquities' Secretary-General Zahi Hawass told Al-Ahram Weekly in a telephone interview. He also asserted that the beautiful beaded nets found on two mummies out of the three which were found suggests that the deceased came from a wealthy family, or perhaps that he was one of the 26th Dynasty's top officials. Hawass hopes that further studies on the hieroglyphs engraved on the triode sarcophagi may reveal more about the life of the deceased.

The mission also unearthed a New Kingdom grave trove. It includes a wooden coffin full with some skeletal remains and two khol jars. The first is a black basalt container bearing remains of black eye paint, while the second is made of alabaster and contains green eye paint. A wooden comb, model mud jars and a small incomplete pottery vessel were also among the finds.

On a deeper level just on the plateau bedrock, said Naguib Kanawati, head of the Australian mission, a number of mud brick Old Kingdom tombs were located.

Against its southern exterior wall several small mud brick chapels were found, each composed of one room -- mostly corridor-shaped -- and connected to each other by a number of shafts. None of these shafts has been cleared yet, but that will be the mission's task next season. But, Kanawati said, a limestone lintel inscribed with the name of a man called Kaemnefert was found blocking the entrance to the first chapel. The second chapel, which is accessed through the first one, has five niches bearing wooden panels fixed into the walls. One chapel belonged to the tomb's owner Hemy, while the second was dedicated to his wife Nedjeptet. Pottery vessels and a jar were found in a close proximity to both panels. On a slightly higher level on the debris a plaque broken into two parts inscribed for a man called Desi -- described as "the greater of the king" -- was found, along with a false door for his tomb.

On the southern walls of the later cemetery, another collection of tafla tombs was discovered. Clearing one of them, a limestone Naos with two linked statues of the tomb's owner and his wife was unveiled. "It is a very well preserved Naos," asserted Kanawati, who added that it still retains some of its original colouring.

Early studies of the inscription engraved on the back of the Naos found that it belongs to Meri, the overseer of the four sacred boats and the king's tutor, while his wife Bebty held the title of the acquaintance of the king.

Hawass describes the Naos discovery as highly significant in that the inscription of "overseer of the four sacred boats" confirms a central idea in the Old Kingdom, namely that the king had four sacred boats -- two solar boats related to the pyramid complex, a third for his funeral rituals and a fourth for the god Hathor. He added that it also reveals how Ancient Egyptian kings loved their tutors as they allowed them to be buried within their vicinity. A similar case was shown in the tomb of sneff the tutor of king Khufu.

As for the wooden drum, inscribed with the name of Nefer-Hetep-Hemy, found among the debris of Meri's tomb, Kanawati sees that despite the fact that it was found in the chapel of Meri, the rarity of the name Hemy and the closeness of his tomb to that of Hemy suggests that the drum originated from the neighbouring tomb.

In an attempt to protect and preserve the later discoveries, said Culture Minister Farouk Hosni, the mission along with the Saqqara Restoration Department are now carrying out comprehensive restoration and documentation work. He went on to say that as the excavated area is surrounded by sand and debris to a height of some ten centimetres, the mission built a stepped retaining wall made from locally collected stones with no mortar, in order to give the site stability and protection. "It will also provide an aesthetically appealing panorama," Hosni said, asserting that this wall could be easily dismantled if future work requires expansion to the north or the west.