The first Thracian mask of solid gold ever found

The mask was discovered over the weekend by a team of archaeologists excavating near the village of Topolchane, 290 kilometers (180 miles) east of the capital, Sofia. Its discovery, archaeologists said, indicates a Thracian king was buried in the tomb.

It was found together with a solid gold ring engraved with a Greek inscription and with the design of a bearded man in a timber-lined Thracian grave.

"These finds confirm the assumption that they are part of the lavish burial of a Thracian king," said professor Margarita Tacheva, who was also on the dig.

"The artifacts belonged to a Thracian ruler from the end of the 4th century B.C. who was buried here," Kitov added.

According to Kitov, the Thracian civilization was at least equal in terms of development to the ancient Greek one. 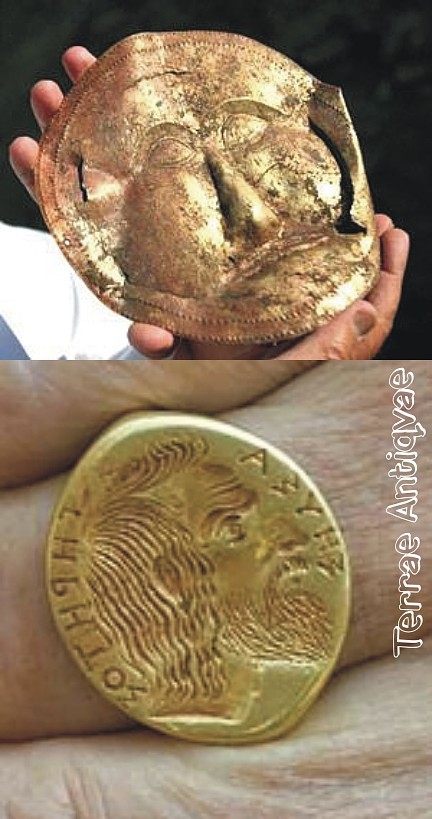 The Thracians lived in what is now Bulgaria and parts of modern Greece, Romania, Macedonia, and Turkey between 4,000 B.C. and the 8th century A.D., when they were assimilated by the invading Slavs.

In 2004, another 2,400-year-old golden mask was unearthed from a Thracian tomb in the same area.

Dozens of Thracian mounds are spread throughout the central Bulgarian region, which archaeologists have dubbed "the Bulgarian valley of kings" in reference to the Valley of the Kings near Luxor, Egypt, home to the tombs of Egyptian Pharaohs.

BULGARIA - A JOURNEY TO THE LAND OF THE THRACIAN KINGS

The pool has a gate, which had once been decorated with statues. Water poured through the gate on to the pool, Focus news agency reported.

Previously, only one facility like this had been found, in Northern Africa.

The Roman mineral baths in Novae covered 7500 sq m and could turn out to be the biggest found in Bulgaria, Focus said.

Archaeologists suppose that the baths were built for the Roman legions that were based in Novae in the second century.

The ring, which has a Greek inscription and the likeness of a man, probably doubled as a seal, Bulgarian news agency BTA said.

The inscription was initially deciphered to read The Saviour of Asia.

Two silver centaurs and a sword that belonged to the interred person were also found at the site. Most of the artifacts found at the site are ornate, which suggests that the people buried there were aristocrats.

Archaeologists see the results of recent excavations as evidence that the Valley of Thracian Kings extends eastward from the Kazanluk area into the Sliven area.

The burial has been initially dated to the fourth century BCE, though some of the artifacts may have been made at an earlier date.