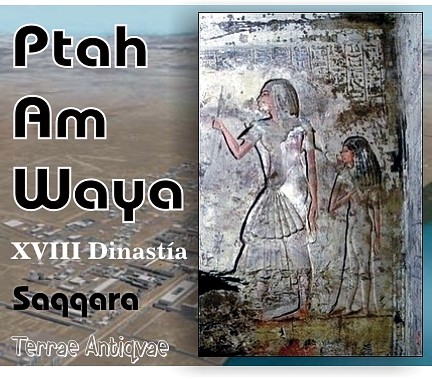 Photo: A detail of a fresco in the tomb of the "Scribe of the Treasure" in Saqqara, south of Cairo. Dutch archaeologists have discovered a tomb in the Saqqara necropolis from the time of Egypts monotheistic pharaoh Akhenaton some 3,300 years ago, the Supreme Council of Antiquities has said.(AFP/HO/File)

CAIRO (AFP) - Dutch archaeologists have discovered a tomb in the Saqqara necropolis from the time of Egypts monotheistic pharaoh Akhenaton some 3,300 years ago, the Supreme Council of Antiquities has said.

The discovery shows that notables contemporary with Akhenaton continued to be buried in Saqqara, just outside the modern day capital of Cairo, indicating the enduring importance of old religious orthodoxy under "the heretic pharaoh".

"The discovery confirms the existence of tombs from important men of state during the time of pharaoh Akhenaton after the same delegation found another tomb from this period several years before," said SCA head Zahi Hawass, who described it as one of the "most important" discoveries in the area.

Pharaoh Akhenaton of the 18th dynasty broke with millennia of ancient Egyptian tradition by insisting on the worship of one god, Aton the sun, instead of many, and left Egypts traditional capital to build a new city dedicated to solar worship at Tel Amarna.

The tomb, which bears the royal cartouche for "Ptah Am Waya" is covered with wall paintings done in the realistic style of the period when classic artistic conventions were abandoned.

The wall paintings include those of "Ptah" going to the afterlife as well scenes of daily life, such as monkeys eating dates.

The Dutch team has been working in Saqqara since the 1990s, and focuses on New Kingdom tombs, particularly those from Akhenaton. Previously they discovered the tomb of the Akhenaton-era priest Meri Neet.

"A tomb dating back to the era of King Akhenation in Pharaonic Egypt had been discovered" Minister of Culture Farouq Hosni carried the good news Wednesday.

The tomb belongs to the holder of the divine seal, "Ptah Om Waya", said Secretary General of the Supreme Council of Antiquities Dr. Zahi Hawwas, noting that it was the most important discovery in the area of Saqqarah.

A Dutch mission unearthed the tomb in excavations around Saqqarah, Dr. Hawwas added.

He made it clear that recent discoveries in the area "made us know for sure tombs of state seniors during Akhenatons reign existed".

Sabri Abdel-Aziz, the head of Pharaonic Monuments Department said the adobe tomb has an open yard and is surrounded by columns.

It has three compartments and limestone walls with scenes representing the deceased and the offerings presented to him.

The Dutch mission has been working in Saqqarah since the 1990s with the aim of finding tombs of the modern dynasty. 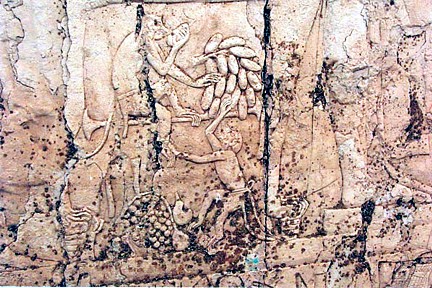 Photo: A relief featuring two monkeys playing beneath the chair of the tomb owners wife.

To the west of the Serapium, during routine excavations, the Japanese mission from Wasida University discovered five Middle Kingdom shaft-tombs. Removing the sand from one of them they uncovered four splendid painted wooden sarcophagi, the first a "black type" anthropoid sarcophagus with yellow lines and scenes featuring the four sons of Horus decorating two sides.

Zahi Hawass, secretary-general of the Supreme Council of Antiquities (SCA), said early studies suggest the sarcophagus belonged to Wiai, a New kingdom craftsmens chief of the house of Amun. "It probably dates from the 18th or early 19th Dynasty."

The three others are Middle Kingdom rectangular painted sarcophagi with eye-panels and false doors, belonging to a Ka-Priest called Sebek-Hat and two mistresses of the house, Keki and Senet-It-Es.

Sakuji Yoshimura, head of the Japanese mission, told Al-Ahram Weekly that the four sarcophagi were found intact and the three dating from the Middle Kingdom are decorated in a style typical of the 12th and 13th dynasties. The decorative scheme and hieroglyphic texts are also similar to those of the sarcophagus of Senu, unearthed two years ago in the same area.

"Such similarity suggests that a sarcophagi workshop specialised in this style of decoration may well have existed in Memphis during the Middle Kingdom," suggests Yoshimura.

As a result of ongoing excavations in the area in recent years the distribution pattern of tombs in the Saqqara cemetery is becoming clearer. Middle Kingdom tombs seem to have a due north orientation and tend to be lined up in clusters. Shaft digging activities were resumed in the New Kingdom at least from the late 18th Dynasty, and continued throughout the 19th.

"The majority of New Kingdom tombs have an east-west axis and were built in the available spaces between Middle Kingdom tombs," says Yoshimura.

Meanwhile, deeper in the desert of Saqqara necropolis, on the eastern side of Meryneiths tomb, a mission from Leiden Museum and University has unearthed an Amarna tomb decorated with wall paintings. The tomb consists of an open courtyard surrounded by pillars and, to the west, three cult chapels. Limestone revetment has been preserved along both the courtyards north and east walls.

According to Maarten J Raven, head of the mission, more relief panels may be hidden under the sand still covering the base of the other walls. The bases of three limestone papyrus columns and one fluted half-column already jut from the sand.

Decorative inscriptions on the tomb walls indicate that it belonged to Ptahemwia, among whose titles are Greatly Praised of the Perfect God, Beloved of the Lord of the Two Lands and Akhenatens Seal-Bearer.

The decoration, involving "lively scenes composed of relatively small human figures with peculiar proportions" as Raven wrote in his archaeological report, compare well with almost contemporary reliefs in the nearby tomb of Meryneith, which was likewise started during the early years of Akhenatens reign. The reliefs have retained many of their original colours though those on the east wall and the east part of the north wall remain unfinished. Inscriptions reveal that Ptahemwias wife Maya was the songstress of the god Amun. On the westernmost part of the tombs north wall the couple are depicted seated on chairs receiving offerings from two priests, with relatives standing behind the chairs or else depicted in a lower register.

A relief featuring two monkeys playing beneath the chair of the tomb owners wife is, says Hawas, the most vivid depiction found inside the tomb.

Scenes involving Ptahemwia are spread across the tombs walls. The most detailed shows Ptahemwia arriving home accompanied by his Nubian guards, charioteer and sandal-bearer. He is greeted by household officials while a servant gestures towards the open door of the house. Indoors, two attendants present a drinking vessel, a water flask and towel. Behind then are two female musicians, one of whom carries a lyre while upstairs his wife Maya is being poured a drink by another servant. To the right of the chariot waiting outside the house is a depiction of an agricultural scene.

Raven believes the tomb will contribute much to our knowledge of Memphis during the Amarna period. Ptahemwia is already known from a pilaster panel in Bologna and a door jamb in the Egyptian Museum. 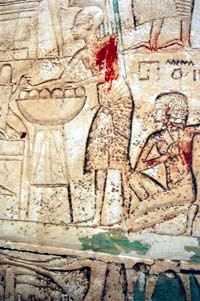