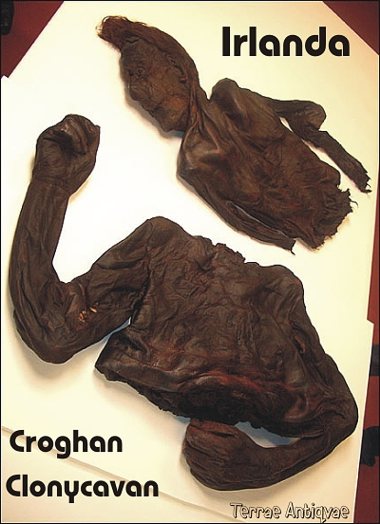 Bog bodies have been found throughout north-west Europe

Archaeologists have unveiled two Iron Age "bog bodies" which were found in the Republic of Ireland.

The bodies, which are both male and have been dated to more than 2,000 years old, probably belong to the victims of a ritual sacrifice.

In common with other bog bodies, they show signs of having been tortured before their deaths.

Details of the finds are outlined in a BBC Timewatch documentary to be screened on 20 January.

The first body dropped off a peat cutting machine in February 2003 in Clonycavan, near Dublin. The forearms, hands and lower abdomen are missing, believed to have been hacked off by the machine.

The second was found in May the same year in Croghan, just 25 miles (40km) from Clonycavan.

Old Croghan Man, as it has become known, was missing a head and lower limbs. It was discovered by workmen clearing a drainage ditch through a peat bog.

Although the police were initially called in, an inspection by the state pathologist confirmed that this was an archaeological case.

Both bodies were subsequently taken to the National Museum of Ireland in Dublin.

A team of experts from the UK and Ireland has been examining the bodies to learn how they lived and died.

Radiocarbon dating, for example, would show that both had died at similar times - around 2,300 years ago.

One of the experts is Don Brothwell, the York University archaeologist who led the scientific investigation of Lindow Man, the bog body found in Cheshire in 1984.

Hundreds of bodies have been recovered from peat wetlands across Northern Europe. The earliest accounts date back to the 18th Century. The unique chemistry of peat bogs essentially mummifies bodies.

"The way peat wetlands preserve bodies has been described as a process of slow-cooking which tans them dark brown," Timewatch producer John Hayes-Fisher told the BBC News website.

Clonycavan man was a young male no more than 5ft 2in tall (1.6m). Beneath his hair, which retains its unusual "raised" style, was a massive wound caused by heavy cutting object that smashed open his skull.

Chemical analysis of the hair showed that Clonycavan mans diet was rich in vegetables in the months leading up to his death, suggesting he died in summer.

It also revealed that he had been using a type of Iron Age hair gel; a vegetable plant oil mixed with a resin that had probably come from south-western France or Spain.

Old Croghan man was also young - probably in his early to mid 20s - but much taller than his counterpart from 25 miles away. Scientists worked out from the length of his arms that he would have stood around 6ft 6in tall (2.0m).

He had been horrifically tortured before death. His nipples had been cut and he had been stabbed in the ribs. A cut on his arm suggested he had tried to defend himself during the attack that ended his life.

The young man was later beheaded and dismembered. Hazel ropes were passed through his arms before he was buried in the bog.

Food remains in his stomach show that Old Croghan man had eaten milk and cereals before he died. But chemical analysis of his nails showed that he had more meat in his diet than Clonycavan man.

This suggests that he died in a colder season than Clonycavan man, when vegetables were more scarce. It may also explain why his remains are better preserved.

The researchers used digital technology to reconstruct the distorted face of Clonycavan man.

From his studies on these bog bodies and others, Ned Kelly, keeper of Irish antiquities at the National Museum of Ireland, has developed a new theory which explains why so many remains are buried on important political or royal boundaries.

"My belief is that these burials are offerings to the gods of fertility by kings to ensure a successful reign," Mr Kelly told the BBCs Timewatch programme.

"Bodies are placed in the borders immediately surrounding royal land or on tribal boundaries to ensure a good yield of corn and milk throughout the reign of the king."