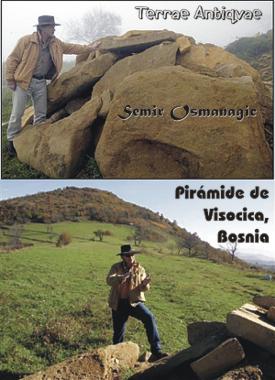 Foto: Semir Osmanagic, a hobby archaeologist, in front of Visocica hill which he presumes to be the top of an ancient pyramid, near Visoko, some 30 km (18 miles) north of the Bosnian capital Sarajevo,Wednesday, Oct. 26, 2005. Osmanagic researched the pyramids in South America and claims a step pyramid with a flat top could be hidden underneath the hill overlooking the central Bosnian town of Visoko. He invested his own money into excavations and believes he found enough evidence to justify a serious excavation and research project.(AP Photo/Hidajet Delic)

(2) OSMANAGIC: WE HAVE ALREADY DUG OUT THE FIRST STAIR OF THE PYRAMID

VISOKO, October 26 (FENA)  Archeological activities have began on hill Visocica near Visoko, which holds the remains of the medieval royal town of Visoki, and the aim is to confirm the existence of the first European pyramid.

Hill Visocica hides the first European pyramid of monumental proportions, claims author of the book Bosnian pyramid of the Sun Semir Osmanagic (photo), which was promoted yesterday in Sarajevo.

Osmanagic on Wednesday told Fena that this facility has an accession plateau wide 40 and long 200 meters built of stone plates. The access plateau is in the form of stairs leading to the pyramid.

The basis for the claim that Visocica holds a most valuable archeological monument is seen in a series of construction anomalies determined during research conducted in August. These anomalies indicate that the hill was not created naturally, but by man.

Apart from the pyramid of the Sun, Osmanagic claims that a smaller pyramid, which he calls pyramid of the Moon is located in the area opposite to Visocica, which again confirms that pyramids were always built in pairs.

We have already dug out one stair of the pyramid and we will continue working on the second stair, says Osmanagic.

Osmanagic was unable to answer when the pyramid would see the light of day, adding that digging out of the wider sections of pyramid only would depend on additional funds.

(3) VISOCICA HILL, Bosnia-Hercegovina (AFP) - Bosnian explorer Semir Osmanagic is convinced he has found Europes first pyramids which he says are a new world wonder dating back to ancient times.

"I was amazed when I first saw them. Im deeply convinced now that this is the work of an ancient civilisation built many thousands of years ago," he said while observing an area he excavated north of Sarajevo.

The 45-year-old is so certain two pyramids are hidden in Visoko valley that he has spent some 16,000 euros (20,000 dollars) researching the area, located either side of a river about 30 kilometres (18 miles) from the Bosnian capital.

Residents of the nearby town of Visoko have long known about the presence of the two structures they always referred to as pyramids but none of them was ever intrigued enough to investigate further.

But Osmanagic, who says he sharpened his eye for archaeology on numerous trips around the world to study ancient civilisations, insists the structures "cannot be the art of nature".

The self-styled explorer with an Indiana Jones-like hat and clothes began his Bosnian pyramid crusade in April this year after visiting the remnants of a medieval royal palace at the top of the hill.

Osmanagic, a businessman and author of several books on other civilizations, says the two "constructions" are precisely aligned with the compass to the four corners of the world.

He says he sees astonishing similarities between them and Mexican pyramids dating back to about 200 AD, which also come in pairs, one representing the sun and the other the moon.

This is why he calls Visocica hill "The Bosnian pyramid of the sun".

Osmanagic says he believes builders from an unknown civilisation shaped the hill into a step pyramid then coated it with a kind of primitive concrete.

After conducting initial probes about 17 metres (56 feet) into the earth that revealed "numerous anomalies in the soil," Osmanagic says he returned to the site with a team of people to start his initial excavation work.

Nadja Nukic, a geologist at the site, said she was most puzzled by three layers of brown polished stone that lie an equal distance from each other underground.

The team began excavating a few spots at the site this week, with the work expected to be completed in two weeks. They hope to be able to uncover one of the pyramid steps and larger pieces the mysterious brown stone for further analysis.

To back his insistence that the two structures are ancient pyramids, Osmanagic says his diggers uncovered slabs of polished sandstone that formed the "paved entrance" to the structures.

The director of the Visoko Historic Heritage museum, Senad Hodovic, admits he is no sceptic. "The pyramids are obviously the work of man. But we need proper and serious analysis to show who built them and when."

Hodovic says he has spent years urging authorities to support archeological research of the plateau of the hill, which is recorded in historic annals as the site of a medieval Bosnian town.

He says the shape and monumentality of the pyramids is not typical for Middle Age Bosnian constructions.

Osmanagic, who has lived in the United States for the past 15 years where he runs a metal workshop business, says he has no ambitions of becoming famous.

"Im not doing this for my own glory. I just want to encourage local authorities to seriously deal with this site which could become Bosnias most profitable product," Osmanagic said.

Thinking of profit, a successful local businessman recently bought most of the area on the plateau where pyramid entrance lies.

Scientist: Bosnian Hill May Have Pyramid

VISOKO, Bosnia-Herzegovina, (AP) With eyes trained to recognize pyramids hidden in the hills of El Salvador, Mexico and Peru, Semir Osmanagic has been drawn to the mound overlooking this central Bosnian town.

"It has all the elements: four perfectly shaped slopes pointing toward the cardinal points, a flat top and an entrance complex," he said, gazing at the hill and wondering what lies beneath.

No pyramids are known in Europe, and there is no evidence any ancient civilization there ever attempted to build one.

But Osmanagic, a Bosnian archaeologist who has spent the last 15 years studying the pyramids of Latin America, suspects there is one here in his Balkan homeland.

"We have already dug out stone blocks which I believe are covering the pyramid," he said. "We found a paved entrance plateau and discovered underground tunnels. You dont have to be an expert to realize what this is."

Osmanagic, 45, who now lives in Houston, is personally financing excavations at the Visocica hill, a 2,120-foot hump outside Visoko, a town about 20 miles northwest of the capital, Sarajevo.

He learned about the hill in April from Senad Hodovic, director of a museum devoted to the history of Visoko, which is rich in Bronze Age and medieval artifacts. Hodovic had attended a promotion of an Osmanagic book about ancient civilizations and thought he would like to see Visokos pyramid-shaped hill.

When the pair climbed the hill, the sweeping view revealed a second, smaller pyramid-shaped hill. It reminded Osmanagic of pairs of pyramids he has seen in Latin America that together create a gateway into a valley.

After obtaining a permit to research the site, which is protected by the state as a national monument, the first probes of the main hill were carried out this summer at six points. Nadja Nukic, a geologist involved in the research, said she found 15 anomalies suggesting that some layers of the hill were manmade.

"We found layers of what we call bad concrete, a definitely unnatural mixture of gravel once used to form blocks with which this hill was covered," Osmanagic said.

"The hill was already there," he added. "Some ancient civilization just shaped it and then coated it with this primitive concrete _ and there you have a pyramid."

Small-scale excavations continued until early November, when winter set in, with the work focusing on what Osmanagic theorizes may have been the entrance to a pyramid-shaped temple.

Osmanagic believes the hill was shaped by the Illyrian people, who inhabited the Balkan peninsula long before Slavic tribes conquered it around A.D. 600. Little is known about the Illyrians, but Osmanagic thinks they were more sophisticated than many experts have suggested.

Nukic, who has walked up and down the hill several times, said she noticed symmetrical platforms in the slopes _ indentations that Osmanagic believes are steps built into the pyramid.

A local businessman who bought a lot at the foot of the hill and brought in a bulldozer to dig the foundation for a house, meanwhile, unearthed manmade sandstone plates that the archeologists think may have been paving stones.

Osmanagic is taking a cautious approach about the hill.

"No fast conclusions, please. The evidence has to be firm, at least beyond a reasonable doubt," he said.

"Not that I dont believe in a pyramid here," he added. "This place was always called Pyramid by the local population. But we have to prove that this is not a natural shape."

He thinks, however, that the shape of the hill speaks for itself.

"God can make many things, but such perfectly geometrically formed slopes, pointing exactly toward the north, south, east and west _ if he did that, well, thats phenomenal itself."

VISOKO, Bosnia-Herzegovina - Researchers on Wednesday unearthed geometrically cut stone slabs that they said could form part of the sloping surface of what they believe is an ancient pyramid lying beneath a huge hill.

Archaeologists and other experts began digging at this central Bosnian town last week to explore the team leaders theory that the 2,120-foot hill covers a step pyramid, which would be the first ever found in Europe.

"These are the first uncovered walls of the pyramid," Semir Osmanagic, a Bosnian archaeologist who studied the pyramids of Latin America for 15 years, said of the stonework found Wednesday.

"We can see the surface is perfectly flat. This is the crucial material proof that we are talking pyramids," he said.

Osmanagic believes the structure will prove to be 722 feet high, or a third taller than Egypts Great Pyramid of Giza.

The huge stone blocks discovered Wednesday appeared to be cut in cubes and polished.

"It is so obvious that the top of the blocks, the surface is man-made," Osmanagic said.

Earlier research on the hill, known as Visocica, found that it has 45-degree slopes pointing toward the cardinal points and a flat top. Under layers of dirt, workers discovered a paved entrance plateau, entrances to tunnels and large stone blocks.

Last weeks excavations began with a team of rescue workers from a nearby coal mine being sent into a tunnel believed to be part of an underground network connecting the three pyramid-shaped hills.

They were followed by archeologists, geologists and other experts who emerged from the tunnel later to declare that it was certainly man-made.

The work at Visoko, about 20 miles northwest of Sarajevo, will continue for about six months. Two experts from Egypt are due to join the team in mid-May.

"It will be a very exciting archaeological spring and summer," Osmanagic said.

I am trying to locate Ljiljana Tomicic who worked at the museum in the 1960s and 1970s. I believe she is a relative and would like to contact her. Can you advise how I can do this? Thank you. Mary Ellen Hunt